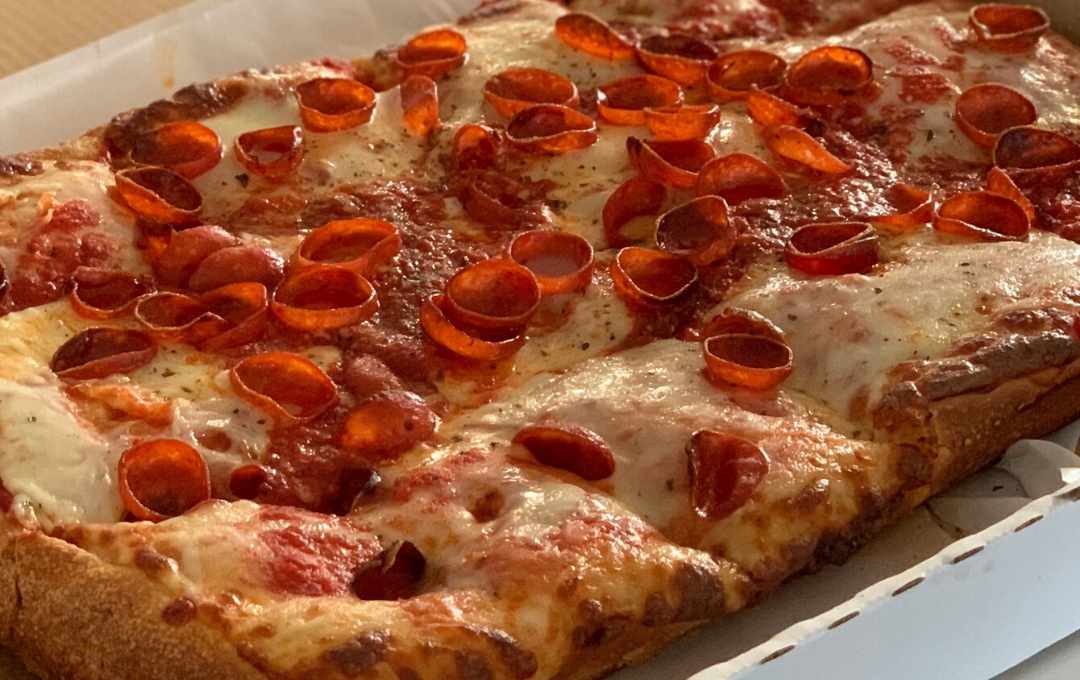 Pizza is one of the most famous foods in Italy, and every Italian region has its own pizza style. In Sicily, one of the two main Italian islands, the most traditional pizza style is the “sfincione,” which is the original style of pizza that inspired the American Sicilian pizza.

Throughout history, Sicily has always been a melting pot of cultures. Arabia, Spain, and Austria are some of the countries to have conquered this territory over the centuries. That’s why the Sicilian taste is full of international influences, which are mirrored even in the food tradition of this region.

The sfincione is traditionally sold in slices. In Italy, this type of pizza is called “pizza al taglio,” which translates to “by the cut.” It’s different from “pizza al piatto,” which is a pizza plate, like the Neapolitan pizza or the Roman pizza.

A traditional sfincione is seasoned with tomato sauce, onion, anchovies, bread crumbs and a typical cheese from Sicily called caciocavallo, which is called “horse cheese” or “cheese on horseback” due to the way it’s tied together via rope and was originally transported from the countryside to the city on horseback.

The name of this Sicilian pizza, sfincione, comes from the Arab word for sponge, “isfang.” The dough is extremely soft and alveolate that reminds the texture of a sponge. This particular dough, porous and robust, allows a richer seasoning. Sfincione is extremely delicious thanks to the large amount of tomato sauce used on the pizza.

The traditional sfincione is baked in rectangular baking pans, and it’s sold in rectangular slices. It’s the first street food in the city of Palermo, eaten throughout the year but in particular during Christmas period.

The main difference between Sicilian pizza and Neapolitan pizza is the lack of crust. With Neapolitan cornicione, a high and fluffy pizza crust is absolutely essential, while the Sicilian sfincione does not present a crust. Instead, the seasoning goes all over the sfincione dough, keeping it more humid than the other pizza crusts.

The dough is very easy to make, using water, flour (type 00, tender wheat flour), yeast, malt, salt, and olive oil. The result is very different from Neapolitan pizza dough. Sicilian pizza has more oil in the dough, so the result is chewy and smooth.

The sfincione is traditionally baked in wood ovens, so when Sicilians want to make their own homemade Sicilian pizza, they make the dough, season it, and then they go to their trusted bakery to bake their sfincione in the wood oven.

The most famous variant of this pizza Siciliana is the “sfincione bianco di Bagheria.” Bianco means white, and it’s referred to as such because in this variant tomato sauce is not used. This version is made with the same dough, seasoned with ricotta, artichokes, and spring onions.

Another delicious variant of this Sicilian pizza is the “sfincione di San Vito,” seasoned with abundant ragu, the traditional Italian meat sauce.

The traditional sfincione is baked in rectangular pans, but some bakeries bake round versions of the Sicilian pizza, for they are often used as gifts.

Even though the sfincione is the most famous Sicilian pizza, there are other pizza Siciliana styles, too.

Catania is the second biggest city in Sicily, and of course it has developed its own Sicilian pizza style. The “scacciata,” or “scaccia,” is a vegetable-stuffed pizza that is traditionally baked during winter holidays.

The traditional version of Catania is a very thin Sicilian pizza dough, seasoned with broccolini, cauliflower, potatoes, black olives, and cheese (ricotta, caciocavallo, or toma cheese). Once the dough is seasoned, it is folded three or four times, brushed with egg yolk, and baked in an oven.

“Pizzolo” is a Sicilian pizza style invented in the small town of Sortino, close to Siracusa. In this part of Sicily, pizzolo is a real tradition. Here, they don’t have pizzeria, they have pizzolerias, which are bakery shops that sell only pizzolo.

This Sicilian pizza is composed by two thin “pizza Bianca” (focaccia) seasoned with olive oil, pepper, salt, and oregano. It is overlapped and stuffed. The savory version of pizzolo is stuffed with meat, vegetables, cheese, and cold cuts.

The sweet version of this pizza Siciliana is stuffed with pistachio cream, chocolate cream, or ricotta and honey.

Pidone, or in Sicilian “piduni,” is a small version of a calzone. This pizza Siciliana is made with pizza dough cut in small circles, stuffed, and folded in half in a half-moon shape, and then baked or fried. The traditional fillings are escarole, artichokes, toma, salt and pepper, or tomato sauce and mozzarella.