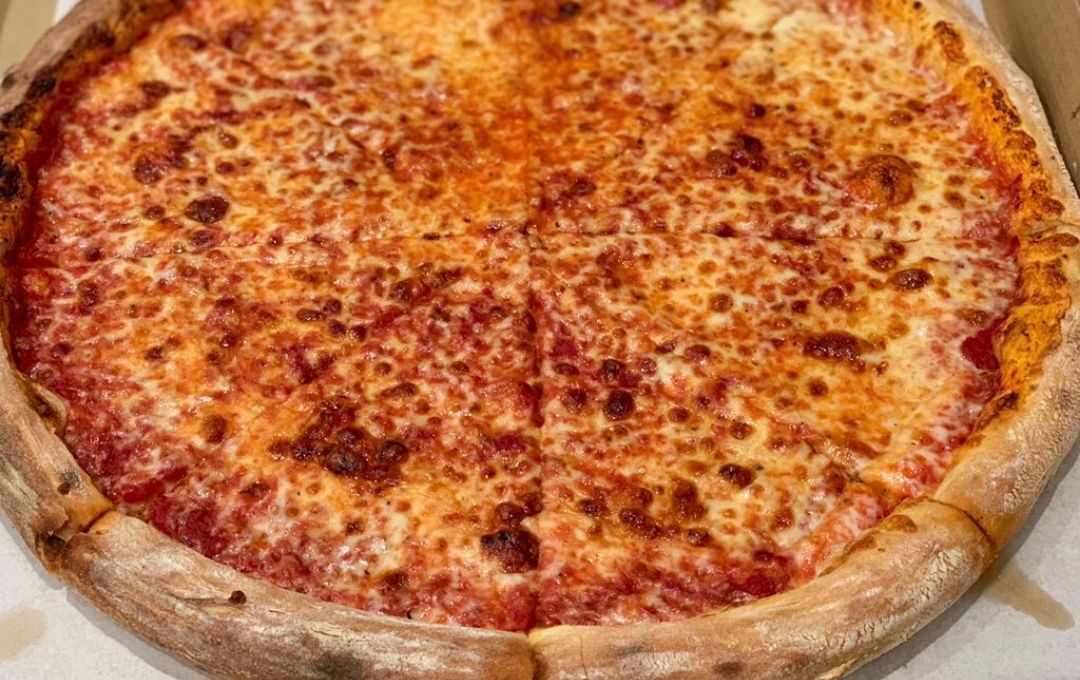 Pizza is a key food group for a lot of people, especially those who are looking to enjoy something delightful when they only have one hand and have to eat and walk at the same time. Sound familiar? It basically describes the entire population of every big city, especially a place like New York City. This likely explains why New York-style pizza is one of the most popular kinds of pizza in the Western world. Do you actually know what makes NY-style pizza different, though? Many don’t, they just think that pizza is pizza. It’s not, though. For example, you can check out what makes pizza Napoletana different from NY-style pizza.

As you might be able to guess, New York-style pizza got its start in good old New York City. This is said to be the birthplace of this particular style of pizza. The birth year itself, however, seems to be a little more up in the air, depending on which story you want to believe.

Technically, the first pizzeria in the United States started selling NY-style pizza in the 1900s. However, before it was a pizzeria, the location was a grocery store that opened in 1897 and sold your regular everyday groceries. It wasn’t until eight years had passed that the owner, Gennaro Lombardi, was given permission by New York State to start producing and selling pizza. From there, it went on to be a widely adopted in the Big Apple. However, the question remains, was the first pizza joint opened in 1897 or 1905?

As the story goes, an employee a Lombardi’s shop named Antonio Totonno Pero, who was making pizza to be sold at Lombardi’s establishment, decided to branch out on his own in 1924. He started his own pizza place on Coney Island that used a lot of the same recipes and plans as his previous employer. Eventually, more restaurant owners and business people realized how quickly pizza was catching on as quality food, and more and more pizza places popped up all throughout the city. By 2010, it was estimated that there were several hundred unique venues offering New York-style pizza.

Even today, you can still go to Lombardi’s and enjoy a quality slice of a pizza pie. It always seems to taste better knowing that it was the original birthplace of NY-style pizza.

How Is NY-Style Pizza Made?

New York-style pizza is commonly made with a large, hand-tossed dough that results in a crust that is on the thinner side. Resulting in a “pie,” the pizza is then cut into triangular pieces to be served, oftentimes six or eight pieces per pie.

While each establishment usually has specific details kept secret in order to make sure that not everyone can make the delicious treat at home, there is quite a lot of literature out there on how to authentically make NY-style pizza for yourself. Get some dough, some sauce, and some cheese, right? Well, not so fast.

The dough is where quite a lot of the secrets are kept for NY-style pizza, and every top pizza maker seems to have his or her own recipe for the dough. Other than the traditional yeast and gluten bread flour, sugar and olive oil are both added to the recipe to give a little extra zing and sweetness that give good NY-style pizza that distinct crunch when cooked to perfection. There’s also the old belief that using the unique tap water in NYC gives the dough an extra touch of flavor, though some critics think this is just an old wives’ tale.

The next step is the sauce. This is most always seasoned with all sorts of spices, including garlic, sugar, salt, oregano, crushed red pepper, and more. Like the dough, many pizza makers have a specialized recipe for the sauce. Canned tomatoes can also get tossed into the sauce as well to give it an extra kick.

With New York-style pizza, the cheese is most often grated, dried mozzarella. f you see a pizza that relies on the fresh slices of mozzarella, it might not technically be NY-style pizza. In fact, it’s likely Neapolitan pizza from that point on.

After the cheese layer, any amount of toppings can be added on top so that it is dressed to the preference of the pizza maker or, more importantly, the customer on the other side of the counter. Toppings don’t need to be added, though. Pepperoni is the most common topping, but there’s nothing wrong with going for a simple cheese pizza.

While NY-style pizza is no longer made in coal burning ovens like it used to be back in its birth in the 1800s and 1900s, the precision of NY-style pizza still requires high heat. This is why a lot of places either use brick ovens or very high heat commercial-sized ovens. It can be very difficult to make a high-quality NY-style pizza at home, but home ovens have gotten much better and the use of a pizza stone or pizza brick can really help you create the authentic New York pizza you’re looking for.

We’ve already mentioned a couple of characteristics of this kind of pizza. The key one being that NY-style pizza should use dehydrated, low-moisture shredded mozzarella cheese instead of fresh slices or grates. But, there are a couple more main differences that you can learn about so you can spot a quality slice of New York-style pizza.

Toppings! The toppings will vary depending on what you prefer. NY-style pizza often comes in large size slices, so there is plenty of room to enjoy some of your favorite combinations of flavors. This could be anything from pepperoni or bacon, to salami or veggies, and so much more. There is also a strong preference for toppings that are spices, such as red pepper flakes, onion flakes, grated Parmesan, basil, and more. All toppings offer something a little different and can vary widely.

Thin, fold-able crust! Another unique trait is that these pizzas are big. Although thin when it comes to thickness, full NY pizza pies are often 18 or 24 inches. This means that slices are also going to be pretty big as well. Since the crust is thin, this kind of pizza is often preferred to be folded in half when eaten. The crust is crispy on the end, but soft and flexible so that it can be conveniently folded when it’s needed. If you can’t properly fold a slice of NY-style pizza, it’s probably not going to be that good, as there’s a solid chance the pizza is under- or overcooked. Folding the pizza can also stabilize the slice so it doesn’t flop around.

Grease, baby! Another delicious detail is that the grease will flow to the middle so that each bit is that classic combination of grease and whatever toppings are on the pizza. Too much grease can be a very bad thing, but no grease can also be a bad thing. When there’s the right amount of grease on a NY-style pizza, combined with the flavor of the sauce and melted mozzarella, you’ll be in food heaven.

Say cheese! The cheese on a NY-style pizza is very important. It should have the right amount of gooey-ness to it so that the cheese stretches like a string when the slices are pulled apart, but the cheese can’t be too melted and too heavy that it drowns out the sauce and the dough. It should be melted, though, so that it’s not under-cooked, and we love to see some charred bubbles that have formed.

In the eyes of Top Vegas Pizza, NY-style pizza is the best pizza. Regardless of whether you have a preference for another style of pizza or not, it’s hard to argue with the interesting and delicious roots that have brought New York-style pizza to us.

Popular, convenient, and practical when you don’t have time for a traditional meal, but just about as tasty as anything on the planet, it’s no wonder that pizza is a food group. With diversity in flavors, toppings, and styles, there’s a little something for anyone and everyone that wants a slice of personalized heaven in their diet.

Where To Find NY-Style Pizza in Las Vegas

New York-style pizza is very common across Las Vegas, and it’s the feature at one of our favorite pizza places in Sin City, Joe’s New York Pizza. Don’t confuse Joe’s with Joey’s New York Pizza, though, which is also in Vegas and provides a pretty appetizing pizza as well. Most pizza places you’ll in the U.S., not only in Las Vegas, serve a NY-style pizza. For more, check out Top Vegas Pizza’s ever-growing pizza review page for more.