Joe’s New York Pizza has three locations in the Las Vegas area. You can find it on Paradise Road, Las Vegas Blvd, and at the newest location, Eastern Ave. in Henderson.

Quality Pizza That Lives Up To “New York” Name

Even though it’s become increasingly popular to put “New York” in your name, any pizzeria that does so is setting the bar high. Joe’s New York Pizza does a good job at living up to it. The pies are large with a hand-tossed crust that is the right amount of thickness. The crust isn’t too thin and it’s certainly not too thick. Out of the main ingredients that make up a Joe’s pizza, the crust is what makes it stand out. As one should be able to do with any good slice of New York-style pizza, Joe’s crust allows for a great fold but it isn’t flimsy. There’s a crisp outer layer that you sense is going to provide just the right amount of subtle crunch when you take a bite. The outer crust has good rise and shape to it as well.

Consistency of the crust is good. Having eaten Joe’s New York Pizza in Las Vegas on several occasions, we’re happy to get as much consistency as we have. It’s a simple thing that often gets overlooked. With Joe’s, you know what you’re getting every time you order.

You can tell that Joe’s uses high-quality ingredients for its pizzas. From the cheese, to the pepperoni, to any other topping you decide, it’s all been pretty good from Joe’s. Specific to the cheese, it’s been evenly spread and melted very well on all of the Joe’s pizzas we can remember eating.

We mentioned that Joe’s NY Pizza has three locations in Las Vegas, and we’ve tried them all. What we found again was consistency. There wasn’t a noticeable difference between the locations, which tells us that management at these locations understand the standard that Joe’s is going for and they deliver upon that standard.

A Solid Menu That’s Not Overwhelming

Joe’s New York Pizza has a good variety of pies that covers a wide spectrum of tastes but also isn’t so overwhelming that you feel like you’re looking through a Cheesecake Factory menu for an hour unable to decide. The pre-built options are simple and work well together. Although we’re admittedly cheese pizza traditionalists, we have enjoyed the white truffle mushroom, buffalo chicken, and white spinach pizza from Joe’s, and of course, we’ve had a basic pepperoni pie. Of course, as with most pizza places worth their weight, you have the option to build your own and there’s a wide variety of toppings available.

Joe’s offers pizza by the slice and usually has several options available upon walk-in. It’s one reason why Joe’s motto is “when’s the last time you got a piece?” It’s up to you if you want to eat them cold right off the display rack or if you want Joe’s to zap them in the oven for a minute or two. Either way, it’s always good to be able to get a good slice of pizza in a hurry and it’s hard not to have a soft spot in your heart of a pizza shop that serves slices.

Joe’s New York Pizza does offer more than just pizza, too. Salads, panini sandwiches, strombolis, calzones, and pastas are available, plus there is a number of appetizers on the menu. Out of all of the non-pizza items on the menu, Joe’s New York Pizza wings are the go-to option for Top Vegas Pizza. There are few combinations better than pizza and wings, and this is a pairing that Joe’s gets right. We’re not too crazy about the exotic gourmet flavors that the wings are available to be ordered in (mango habanero, sriracha, teriyaki, and lemon pepper), but we love the traditional mild or medium wings.

For what you get, focusing on quality and size of the food, Joe’s New York Pizza is priced pretty all right. It’s not cheap, but it’s not designer-pizza expensive. A 20-inch cheese pizza will run you just more than $20, and a 20-inch pepperoni pie is around $25. Where they’ll get you is with the additional toppings if you select to build your own, but at Top Vegas Pizza we’re into the classics and believe a cheese or pepperoni pizza is the best way to go. Would we like to grab a cheese pizza for less than $20? Sure, but you’re getting a 20-inch pie with a large when plenty of places offer 18-inch pies. Whether it’s dinner for your family on pizza night or some pies for the big game, you’ll be more than filled up and have enjoyed the pizza for a couple of extra bucks more. 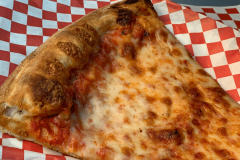 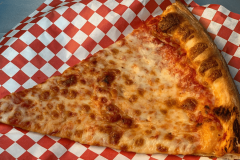 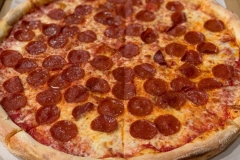 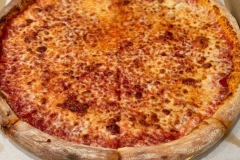 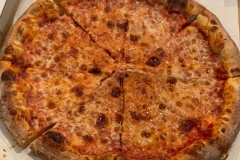 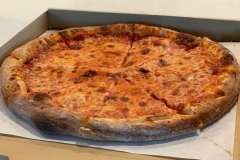