Sal’s Pizza in Henderson, Nevada, bids itself as “Where New Yorkers eat” and “Great Italian food made by New York Italians.” The pizza is New York-style pizza with a specific authenticity that we’ll get to. It has one location and is on the more affordable side.

Decent Pizza for the Price

The pizza from Sal’s Pizza is good. It’s just about your average New York pizza, but when you’re in Las Vegas, that’s more of a good thing than it is a bad thing.

Sal’s Pizza is on the cheaper side, so you can’t really argue with the quality you get at the price. We’ve had Sal’s Pizza a few times and plenty of us at Top Vegas Pizza would eat it again, and we have, but it likely won’t be ranked in our top 10 pizza rankings anytime soon.

The inner/under portion of the crust is cooked well enough that the pizza isn’t flimsy. When you pick up a hot slice, it’s got some bend to it, which is what you’d expect from a good piece of NY-style pizza. The undercarriage had a nice crispiness to it, which could be felt both when you picked it up and when you bit into a slice.

The outer rim of the crust is more on the average side. If the pizza cools off at all, which can happen on a delivery or a ride home from picking it up, the outer crust will likely be a little firm when you bite in and it’ll be more difficult to fold the pizza slice like many of us love to do with this style of pizza.

If you go for a cheese or pepperoni pizza from Sal’s, then you should expect to get the right amount of sauce. The sauce is often the most underrated ingredient to making a good pizza. Sal’s nails the sauce pretty well, both with taste and amount. Too often does a pizza have too much sauce that causes the dough to become soggy. Where the pizza lost a point for the outer crust, it gained one back with the sauce. You can taste the quality and it’s not overwhelming. It’s fresh and authentic. It’s not too spicy, too tomato-y, too tangy, or anything like that.

For as much as we are fans of the sauce, we’re not so much fans of the cheese. Our guess is that the composition and amount of cheese used haven’t worked well together is getting a quality melt. Much like the outer rim of the crust, if the pizza cools at all then the cheese suffers a bit. In our experiences, it’s also been a little too oily for our liking.

The toppings can be hit or miss, in our experiences. The simplest topping, pepperoni, is decent, but others can seem basic. At times when we’ve had the pepperoni pies, they can be a little greasy. But hey, we’re not going to complain all that much when all of the large pies are priced at less than $20.

At Top Vegas Pizza, one of our rules is to “keep it simple, stupid.” Sal’s does have a very simple menu, which we like. Not too many places offer a decent Sicilian-style pizza, but Sal’s does, so that’s a plus. You can also stop in and grab a slice of cheese for $2.50, which is a good, affordable bite to eat when you’re crunched for time.

If you’re a family looking for a decent pizza at an affordable price point, go ahead and call up Sal’s Pizza and order away. If you’ve got a large group to feed and don’t want to break the bank, Sal’s should be right up your alley. For having some friends over for a night of poker or to watch the big game, it’ll work there, too. 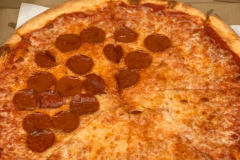 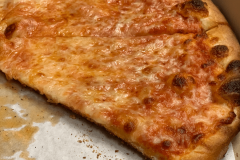 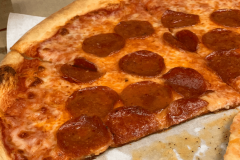