Since he moved to Las Vegas from New York in 1976, Carmine Vento has been serving pizza to the city. There are currently three locations for Carmine’s Pizza Kitchen around Las Vegas.

We’ve tried a couple of pizzas from Carmine’s. We’ve gone with the simple large cheese pizza and a specialty Sicilian pizza called the Nonna’s pizza. Regarding the Nonna’s, for which you can find out review of further below it may have been removed from the menu.

Pizza You Can Enjoy

We found the large cheese pizza pie from Carmine’s to be a good representation of your common NY-style pizza. The pizza had good structure with a crispy outer crust and undercarriage, a softer upper dough, and delicious sauce. An even spread of mozzarella cheese topped the pie and wasn’t overpowering. There was very little if any additional grease on the pizza.

At Carmine’s, the sauce is something we’ve come to appreciate. It doesn’t stand out in the sense that it will knock your socks off with flavor so distinct that you’re thinking “woah, what’s that?” Rather, it’s unique in a subtle way and a bit on the lighter side. You can tell that there has been time put into the sauce.

The cheese pizza has good consistency throughout an entire piece, which is an important detail that often gets overlooked when you’re chomping down, bite after bite. You’re not going to get a pizza that is too doughy, has too much flop to it, is overly thick, or weighed down by cheese. You’re just going to get a pretty solidly constructed, good-tasting New York-style pizza, and that is what we enjoy.

Carmine’s Pizza Kitchen has a lot to offer. For pizza, it has both New York-style pies and Sicilian pizza. One of the Sicilian pizzas is the Nonna’s pizza, although as we said above, it appears the pizza may have been removed from the menu.

It’ll run you about $25 and comes as a thick pan pizza with plum tomatoes, garlic, fresh basil, and olive oil. It’s thick, so make sure you’re in for a good amount of pizza if you end up going with the Nonna’s.

If you recall our write-up about the inaugural Las Vegas Pizza Festival, you’ll know that we thoroughly enjoyed the sauce from Carmine’s. It really did stand out when we tried it at the festival. The sauce also stood out on the Nonna’s pizza but not as much due to the plum tomatoes and basil that topped the Nonna’s. Upon first look, this topping combination gave off a pico de gallo vibe to it. Although not too bad, we’d prefer to go with a regular cheese Sicilian pizza over the Nonna’s.

The Nonna’s pizza had good thickness, but it wasn’t too thick in that it was overpowering. The dough had good airiness to it, which kept it lighter than it looked. The cheese, plum tomatoes, and basil seemed thicker than the actual dough itself. There might have been a little too much cheese, though. The dough overall didn’t end up soggy, but there were a few spots where the juices from the plum tomatoes, basil, and olive oil did get to the dough a little too much.

The outer rim of the crust had an good crunch to it. You could definitely tell the pizza was cooked in a pan and had that pan-baked crunch to it, but it wasn’t overdone and still had plenty of soft, fluffiness to it.

If you were having a small get together and wanted to have some classier pizza bites, then the Nonna’s wouldn’t be a bad choice if you were to order it and then cut each large slice into two or three smaller pieces. 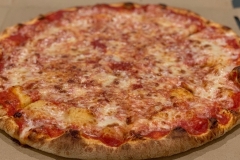 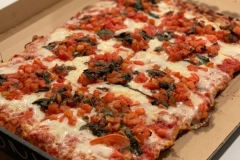