Naked City Pizza was started by a family from Buffalo, New York, in 2009 and it specializes in Buffalo-style pizza. There are a couple of locations in Las Vegas.

Buffalo-style pizza is something we at Top Vegas Pizza are a little partial to, mainly because our founder grew up in the Nickel City. Geographically, Buffalo is located almost directly in the middle of New York City and Chicago. The location is relevant because Buffalo-style pizza can be thought of as a blend between NY-style pizza and Chicago-style deep dish.

It can be hard to find Buffalo-style pizza outside of Buffalo, NY, but thanks to Naked City Pizza we can taste it in Las Vegas. Even if it might not be your favorite style of pizza, many people love the Buffalo-style pizza that Naked City serves and it can never hurt to have greater variety. Having a wealth of variety is one of the reasons the Las Vegas pizza scene is so awesome.

Buffalo-Style Pizza You Should Try

The added grease that can come from the style of pepperoni (if you get pepperoni on the pizza) and large amount of cheese should be prepared for, but we wouldn’t say these characteristics are so over the top that we’d avoid Naked City Pizza. In fact, we like it. We would suggest that you don’t wait too long to eat the pizza once it’s been baked or picked up, because this type of pizza might not sit well for too long.

If you get one of the larger pizzas from Naked City, know that you might end up with some pieces that don’t have crust on any of the edges because they’ll be middle pieces. It’s not too much of a negative, but we do love pizza crust.

The “Buffalo 22” is one of Naked City’s specialty pizzas that we had the pleasure of tasting at the first-ever Las Vegas Pizza Festival. If you’re a fan of garlic, then the “Buffalo 22” might be right in your wheelhouse, featuring its white garlic sauce, crispy garlic, and roasted garlic crust. It also has cup-and-char pepperoni, sausage, and hot honey that provide a solid mix of savory and sweet.

In addition to the pizza, Naked City had its suicide fries featured on Diners, Drive-Ins & Dives with Guy Fieri. The fries are spicy with plenty of peppers and a sauce that’s got plenty of kick, so you’ve been warned. We all know Buffalo, New York, is known for its wings, right? The wings at Naked City Pizza are pretty good, too.

Dave Portnoy of Barstool Sports tried Naked City Pizza in 2017, when he was out in Las Vegas for the Floyd Mayweather and Conor McGregor fight. Portnoy wasn’t too fond of the pizza, rating it a 5.6 out of 10. We agree with his assessment of no-crust pieces, but we wouldn’t rate Naked City Pizza as low as he did on the scorecard. That said, we wouldn’t rate it as high as Fieri might, who always keeps things very positive on Diners, Drive-Ins & Dives. We’d go somewhere in the middle of Portnoy and Fieri.

Naked City Pizza is better than your average slice, especially if you get the cup-and-char pepperoni. Although it may not be our go-to choice, it’s certainly in the rotation and one we’d recommend you try, if anything for the diversity offered by Buffalo-style pizza. 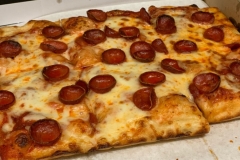 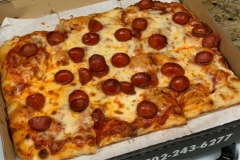 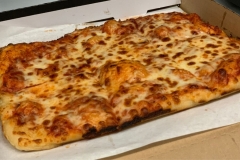