With a newer location opened in Henderson, Those Guys Pies is now serving out of two locations in the Las Vegas area. The shop serves up East Coast-style pizza that is akin to New York-style pizza and was started by Chris Builder and Roy Bass. The two have spent a lot of time in the pizza industry. Bass even helped make Secret Pizza at the Cosmopolitan a popular spot. When Guy Fieri visited Those Guys Pies for an episode of Diners, Drive-Ins and Dives, he mentioned Bass as a “pizza Picasso.”

Our experiences so far with Those Guys Pies have been that the pizza is very flavorful, but the crust comes in a little too chewy to rate it highly. The contrast between the two makes for an interesting pizza review. One half of us says that we really love the abundance of flavor that smacks our taste buds from the pizza, but the other half of us really dislikes that the chewiness of the crust makes the pizza tougher to get through.

The White Pie from Those Guys Pies is one of the pizzas we’ve tried. It’s made with ricotta, mozzarella, parmesan, and garlic. The flavor of this pizza was pretty good, especially for those that like garlic. The garlic provided a punch that we took on the chin, in a good way, with every bite, The ricotta chunks provided a solid one-two punch in combination with the garlic flavor.

The structure of the pizza was pretty good. We had an 18-inch White Pie and each piece had minimal flop to it. The look and feel of the pizza didn’t tell us that it was undercooked at all, but when biting into a slice we did notice the dough had a chewy texture to it and didn’t provide much crunch at all, even a subtle one. For as much as the flavor of every bite wowed us, the dough being on the chewy side brought us back down to Earth.

We’re not normally out here suggesting adding toppings to pizza, but in this case, we’ll provide more of a suggestion that something one must do. The White Pie feels as though it would go very well with tomato sauce drizzled on top, like you would see on a light version of a Detroit-style pizza.

One interesting thing is that we had a couple of pieces of the White Pie left over and ate them the following day. We reheated them in the oven heated to 500 degrees with use of a pizza stone for four or five minutes. This second baking really firmed up the crust and added almost the perfect level of crunch to it, so maybe the pizza was slightly undercooked from the day before. The flavor remained and the added crunch really brought out the full personality of this pizza.

Great Flavors from the Margherita Pie

Another pizza we’ve tried from Those Guys Pies in Las Vegas is the Margherita. This one is made with roasted tomato, basil, parmesan, and garlic. Again, it’s a little different than the classic cheese pizza we will go with when trying a new pizza place, but the Margherita was recommended to us from some friends so we had to check it out.

Once again, the flavor took center stage. You could taste everything from the tomato to the basil to the parmesan to the garlic. With each bite, the tomatoes and basil popped if you bit into a piece of them, but the flavors didn’t overwhelm you in any way. The garlic was less powerful than it was in the White Pie but worked well to complement the other toppings working with the Margherita.

Also once again, we found the crust to be on the chewy side, so while we very much enjoyed the delicious flavors this pizza presented, it was tough to get past the dough feeling a little rubber-like. The structure of the dough was solid, though, with little to no flop.

We knew what had happened when we tried some of the White Pie the following day after reheating it in a hot oven, so we tried the same with a couple of slices of the Margherita. Again, it seemed to improve the pizza. The flavors were still there and the crust developed a thin crunch to it without a chewy texture.

Both pies had very tasty flavor and you could tell the ingredients were fresh and properly planned to work together well. There are several different pizzas on the Those Guys Pies menu, so we’re a big eager to try out some of the others. One thing we’ll be doing though is asking them to bake the pies for a couple extra minutes to give us some crunch to the crust. 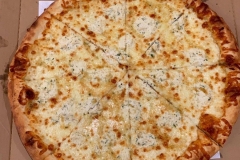 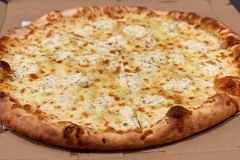 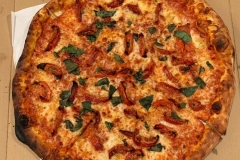 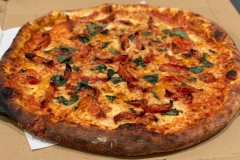