When we heard of a new, speak-easy style pizza joint opening in Las Vegas, our interest was piqued. If there’s a new pizza shop coming to town, it’s always going to go on our list of places to hit up and try out. If there’s an interesting twist, we’re only that much more intrigued.

Pizza Anonymous was born in 2020, the brainchild of Lin Jerome and Alexandra Lourdes, who own Café Lola and Saint Honoré in Sin City. As the two discussed in an interview with Vox, the idea of Pizza Anonymous was something that was put into motion during the COVID-19 pandemic at a time when businesses, especially restaurants, were either shut down or operating in a limited fashion. Between the two already existing shops, the ingredients and materials were already on hand to make pizza, and there were family ties that helped as well.

After putting all of the pieces to the puzzle together, Pizza Anonymous was launched at the end of July, operating out of Saint Honoré in Summerlin. Saint Honoré operates on a schedule that has it closing at 3 p.m. on days that it is open. Café Lola is similar, closing at 5 p.m. on days that it’s open. Transitioning the venues into pizza shops in the later hours allows hungry Las Vegans to get their fix from Pizza Anonymous. In early September, a second Pizza Anonymous location was opened, this time at Café Lola in Henderson.

Dubbed an underground pizza joint with a speak-easy feel to it, Pizza Anonymous bakes Roman-style pies. Roman-style pizza gets it name and characteristics from pizza that originated in Rome, Italy. The dough is like focaccia that has been rolled flatter. Roman-style pizza is typically served in square (or rectangular) slices, which is what you’ll find at Pizza Anonymous, and each slice, or pie, will come with a decent amount of crunch.

With Roman-style pizza, you also won’t get the flop that you might get with Neapolitan pizza or NY-style pizza. Usually made with oil added into making the dough, the crust comes out crispier and will keep its shape better. When you pick up a piece of Roman-style pizza, you might be surprised by how light it feels compared to its appearance, but that’s because the dough tends to be a bit airy, which then leads to a light and fluffy bite.

Another characteristic about Roman-style pizza is that it’s often baked in a sheet pan, which will help lend to the pizza’s final rectangular shape.

So, how does Pizza Anonymous rate? Pretty well.

The menu is simple, with only a handful of options to choose from. This is something we tend to prefer. Unless you’re Pizza Rock and backed by one of the most world-renowned pizza experts, just keep it simple and do what you do best. It’s clear that Pizza Anonymous knows what it does well and it does it very well.

The Margherita Pizza from Pizza Anonymous is the leader in the clubhouse for us, but if you’ve read from us before, you know we also like to keep it simple. The Pepperoni Pizza, complete with cup and char pepperoni, is another favorite of ours. Even though we prefer our pizza with traditional pizza dough, Pizza Anonymous does make its own cauliflower dough that can be used for any pizza if you’re looking for a gluten-free option.

As we hoped, Pizza Anonymous’ baked dough has a great crunch to it, but the interior is light and soft. Not a ton of sauce is used, but it’s definitely flavorful so there doesn’t need to be gobs of it on the pie. The sauce works great with the cheeses it’s paired with. If you get the pepperoni, you won’t be disappointed with its flavor. The outer crust is nice and crunchy, but like the inner area of the pie, it’s airy and not over-filling.

If you’re someone who prefers to get a little more fancy with your pizza, check out the Fresh Burrata and Prosciutto Pizza from Pizza Anonymous. For the meat heads, go for the Salumi Pizza, which has Finocchiona salami and Prosciutto di Parma. Across the menu, you’ll find a quality assortment of pies, with each providing robust flavor.

We know we’re here to review pizza, but we’d be remiss if we didn’t suggest that you pick up some of Pizza Anonymous’ beignets. They’re very, very good and can be just the dessert to top off a night (or day) of pizza.

All in all, we’re happy Pizza Anonymous is here. It’s good to have another style of pizza on the Las Vegas scene and Pizza Anonymous’ Roman-style pies are very good. 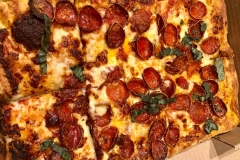 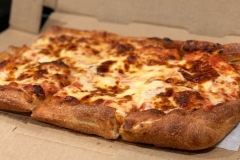 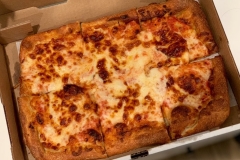 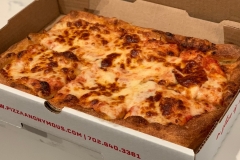 What Makes a Good Pizza?